What a week!  We marched for science and then Neil deGrasse Tyson spoke at Proctors in Schenectady.  Thanks, Universe!

I’d been hearing rumblings about a science march since right after the election and heart from the organizers of our local march at a Science on Tap event. Why did I want to go?  After all, who doesn’t care about science??!! As it turns out, a whole lot of people are willfully illiterate when it comes to science (think of the numbers who refuse to believe in evolution), and our government seems to be pushing an anti-science agenda.   Cuts to the NIH, EPA, and, defunding of critical medical research- I could go on, but you get it, our values as a nation are under attack when independent research is under threat.

The march in Albany was wonderfully geeky- fun songs, local activist tabling, speeches by politicians emphasizing the role of science and as Pat Fahey said, to loud applause

Science is fundamental. Science should also be non-partisan!

There was also some marching and chanting and waving of great posters.

The stated goals of the organizers are wonderful:

I’m looking to see what happens next and being involved in ways other than marches, letter writing, and calling my Congressional Rep (speaking of, support HR 1358- the Scientific Integrity Act).

With the natural high of joining thousands of your fellow citizens for committed action coursing through my veins, I then was honored to see Dr. Neil deGrasse Tyson, scientist to the masses, astrophysicist, Twitter star, and fellow Bronx High School of Science alum. My husband and I headed to Proctors with the nervous, giddy excitement of people hoping not to be disappointed by one of their heroes.  We were NOT disappointed! If anything, I think I love the good Doctor more.

The theme of the night was cosmic perspective meaning world views from multiple perspectives. In a way we really are insignificant in the grand scheme of the universe (and multiverses for that matter) but what we share in common atomically is greater than all that.  It was a two hour conversation with political and cultural overtones.

For me, one of the most fascinating parts of the evening is seeing how science has been a top priority to different cultures at different times, and he used the periodic table of elements to demonstrate. By showing us what nations discovered what elements, we plainly saw how scientific inquiry was a huge priority of the British Empire, Germany, and the U.S. The United States prioritized science through most of the 20th century.  Dr. Tyson related how space exploration in particular did more than just bring us to the moon- it changed our mindset, and made discovery a key social construct.

Tyson posits that the space race also changed our perspective on Mother Earth. Images of our blue planet literally changed after astronauts showed us the view from outer space; prior to that, no one drew Earth with atmospheric clouds! But even more importantly, the modern environmental protection movement boomed after 1968.  President Nixon and many others made clean air, water, land a top priority even with all the social and cultural clashes of the day- it was a bipartisan effort.

And what happens to cultures that don’t make scientific inquiry a priority? Dr. Tyson talked about the amazing influence of the Islamic world on science and math at a time (800-125)  when Europe was stuck in war and misery. Much of algebra, algorithms, even our numeric system are all products of that golden era of scientific inquiry.  What happened? The world view, the perspective of the Islamic world changed- the things of God, and the things of this world were separated.  As a person of faith, that is really interesting and sad to me- to me all things are connected. After centuries of this mindset, the Islamic world is now moving back to scientific inquiry. It will be interesting to see how countries like the United Arab Emirates move forward; already the architecture is surpassing much of the Western world in beauty and modernity. Go Google some images of buildings.

But needless to say, we brought it back to our era- are we now moving away from the American ideal of curiosity. I don’t think so.  I don’t believe Dr. Tyson or the audience thinks so.  We have to burn with curiosity and fight for funding but also, educate ourselves, and think of how vital it is for students now to think critically and independently. How to think is as important as what we think about.

It was a thought-provoking night, but the audience laughed and shouted out at Dr. Tyson, and he took our questions about dealing with idiots, gravity, space exploration. There was one moment that brought a tear to my eye- a tribute to Carl Sagan, and our Pale Blue Dot:

The Earth is a very small stage in a vast cosmic arena. Think of the endless cruelties visited by the inhabitants of one corner of this pixel on the scarcely distinguishable inhabitants of some other corner, how frequent their misunderstandings, how eager they are to kill one another, how fervent their hatreds. Think of the rivers of blood spilled by all those generals and emperors so that, in glory and triumph, they could become the momentary masters of a fraction of a dot.

Our posturings, our imagined self-importance, the delusion that we have some privileged position in the Universe, are challenged by this point of pale light. Our planet is a lonely speck in the great enveloping cosmic dark. In our obscurity, in all this vastness, there is no hint that help will come from elsewhere to save us from ourselves.

I shed a tear, thinking of how much life is wasted, and how much we can do for one another still.

The evening ended with one final surprise- a call on speaker phone with Bill Nye. I’ve rarely heard an audience cheer and am content that it was over a science lecture. Victory!

BTW, this is yours truly at the March: 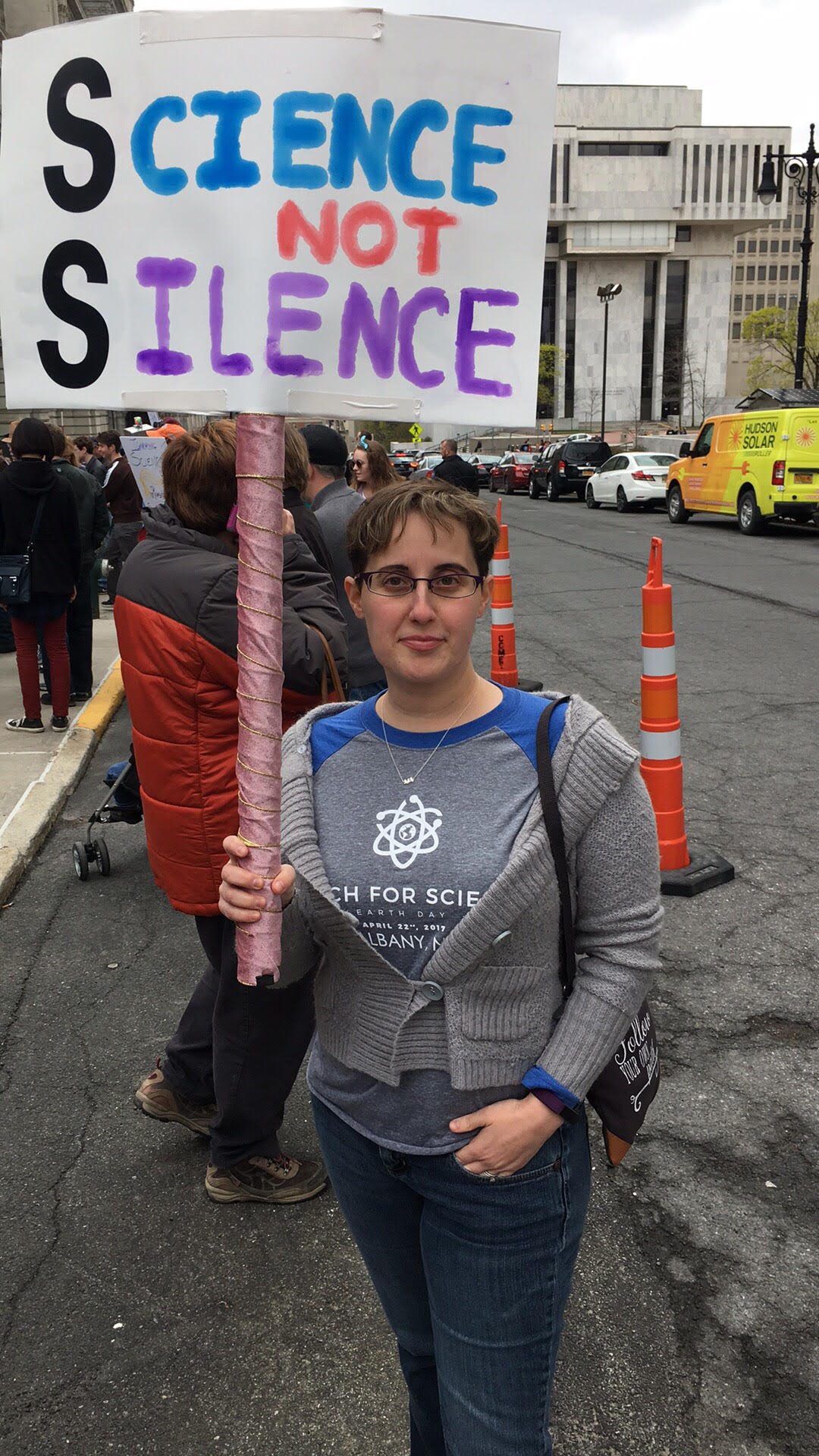