Written on May 10, 2017 by Anna Varney in The arts Upstate NY with 2 comments

You should probably go see Cabaret at Proctors, especially since it’s only here until May 14th. Go if you want a sexy, bawdy good time that will also make you think and awaken inner conflicts.

At the dark heart of the story are these two characters in 1930s Berlin, at the seedy Kit Kat Club.  The club is dangerously degenerate, though every one is blasé about, and ignoring the Nazi terror around the corner. The Emcee is one of the most perfect, mysterious characters in modern musicals. At turns sarcastic and witty, sexy and vulgar, his story and appearances make the entire show worth watching.  Jon Peterson is the actor in this cast and he is magnificent and edgy, with great cast and audience chemistry.

Leigh Ann Larkin plays Sally Bowles, the comic, strange character who is a prelude to the manic pixie dream girls of cinema and theatre these days. Larkin has a strong voice and uses her acting chops to showcase.  At times, the expressions on her face where ghoulish, and off-putting. Larkin makes some interesting choices.

One of the reasons I love Cabaret is that its full of surprises and a good review should not reveal those. I will share that the Kit Kat Club is full of talented musicians, the storyline is haunting, there are two doomed love stories (only one of which I find compelling- that of the older couple). But the music is what will keep me coming back to this story: “Don’t Tell Mama, and “Money” are catchier than any pop tune, but “Tomorrow Belongs to Me” and “If You Could See Her” are nightmares dressed in gossamer.

And that’s really what makes Cabaret a classic. You are pulled in by the comedy, the raunchy tone and songs, and then little by little you realize you are watching chaos unravel: neighbors turn on neighbors as the Nazi political party wins the day, a kind Jewish merchant loses his dream and is ostracized, but clings to his German identity. Casual cruelties lead to self-destruction in personal relationships and nationwide destruction.

A little too close for comfort these days in Trump’s America, right?

Catch it before it’s gone.

P.S. some people were a tad offended by this production- so go with fair warning.  Be an adult.  Do not under any circumstances bring children (yes, that happened on opening night). 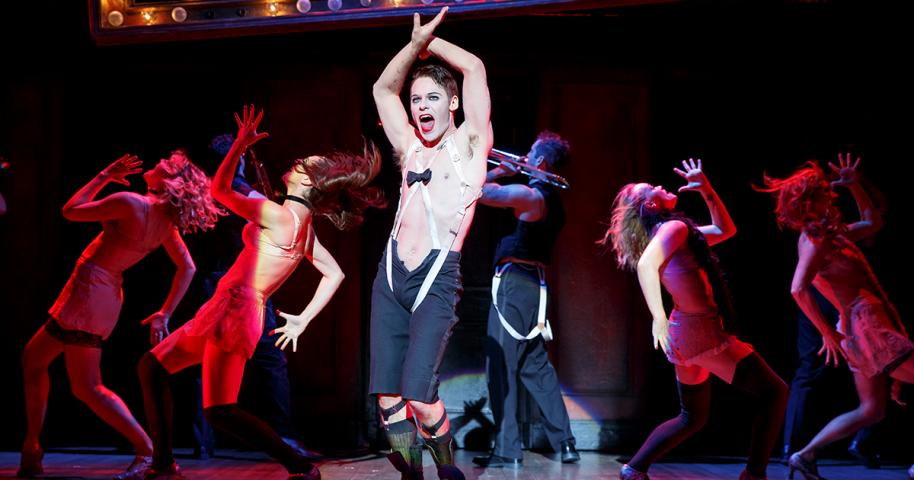