Written on June 19, 2017 by Anna Varney in Spirituality Upstate NY with 0 comments

Reverend Sam Trumbore is a leader in our community and ‎Minister at the  First Unitarian Universalist Society of Albany, NY.

I found him thoughtful and intellectual in approach, and someone who cultivates emotion and heart-centerdness.  We had a multi-layered conversation on his spiritual awakening, the work he does, and aspects of life in Albany.

Sam Trumbore had a traumatic accident at U.C. Berkeley, but didn’t let that stop him. Even when his allegedly healed leg turned out to still be broken, he continued pursuing his degree and interests.

Afterwards, he felt like he was given a taste of unconditional love.  Sam then went on to join a healing circle for his injured leg, even though he at first felt it was bit ‘woo-woo.’ Despite that skepticism Sam reconnected to the feeling he had  in his original spiritual awakening and realized it was something that can be cultivated.  He kept exploring and learning, including, and very romantically, with a Sufi group among the redwoods in Mendicino, California. He also studied psycshic healing for a period of nine months.

Later, when he was introduced to Buddhism, Sam says, ‘that rang my bell like nothing has ever rung my bell.’

Although Sam Trumbore grew up Unitarian, at the time of his religious he described himself as a scientific atheist. Even after the occurrences Sam continued on with his degree in electrical engineering and landed his dream job.

Though he had a career he worked very long and hard for, a feeling came over Sam that he should go to seminary. He loved his profession, but he wanted to do something meaningful, and ‘heart work.’

Reverend Trumbore’s parents were intellectually oriented and bookish and adhered to the Unitarian tradition,  and gave him this foundation in life. Although he was attracted to monastic Buddhism, Sam still wanted to serve others and possibly have a family. For him, ministry is serving people and his decision to become a Reverend formed around this question:

Where could I serve people best? And I feel like Unitarian Universalism is where I can do that best.

Helping people grow and develop is Sam’s passion as a Reverend. He enjoys bringing a neutral view and engaging with people to get to know them.

The appeal for many to Unitarian Universalism is the intellectual approach. It is a tradition rooted in social justice and community and fits well with people who want to think about their religion rather than have a more emotional faith based encounter.

I love the description Reverend Trumbore shared with me of what life in the congregation:

We have shared values rather than shared beliefs. We have purposes and principles like: the inherent worth and dignity of every person or the interdependent web of  existence, compassion in human relations, democratic process, world community. . .

People in the UU tradition have a more individualistic path, and it’s a ‘misfit’ church in many ways.  Everyone is curious about what other people are up to, while maintaining individual spiritual pursuits.

deep challenges in the UU tradition, including confronting white supremacy, racism, and patriarchy. Women are strong leaders in UUA (and the majority of ministers in UU- about 60%). This has brought about change in congregations, particularly in the services. What was a more humanist tradition has changed to be more inclusive.  It is a ‘big-tent’ for members.

Sam leads a Buddhist practice group and finds the practices of Buddhism very fulfilling.   He has a strong Buddhist orientation, and particularly the branch of Theravada.

As Sam expresses it, Buddha avoided giving answers to questions about God or defining the afterlife. This silence is  similar to the experiential quality of Unitarian Universalism.

He is also involved in the UU Buddhist Fellowship group and the First Unitarian Universalist Society of Albany recently hosted a Change Your Mind Day. Along with other local groups like the Albany KTC, Oneself Labyrinth, and the Shambala Center of Albany (among others), UUA hosted this day to explore mindfulness, meditation and contemplative practices.

On a deeper level, what Sam relates to about Buddhism most is the Four Noble Truths, and how life beings in suffering.  Suffering, which matched his experience of life with childhood illness, is the basis of what many of us endure. The experience of freedom from suffering, through the Eightfold Path, and of meditation are profoundly important to him and many other Buddhists.

Meditation can help an individual in many ways.  For Sam Trumbore, a key result is being less ’emotionally reactive.’ Prolonged meditation practice can also help achieve a clearer mind, inner peace, and being more present with people and in the moment.

I asked Sam if he prays and he did tell me about the devotional aspects of Sufism- where God is love, lover and beloved. He could cultivate the feeling of love and love God without having a belief or understanding about God.

Lovingkindness, which I practice as well, is seen by Sam as very powerful. Initially resistant, he has grown to see if as a similar experience to Sufism.

Sam Trumbore confesses to being comfortable praying to Jesus, Krishna:

They are all manifestations of different qualities of existence.

At the same time, he isn’t necessarily comfortable praying for things. What he does believe in is that metta Buddhist  formula: sending love out, identify with another person’s pain and share people’s joy as well. The most challenging part of the formula is equanimity: being with whatever the moment requires: 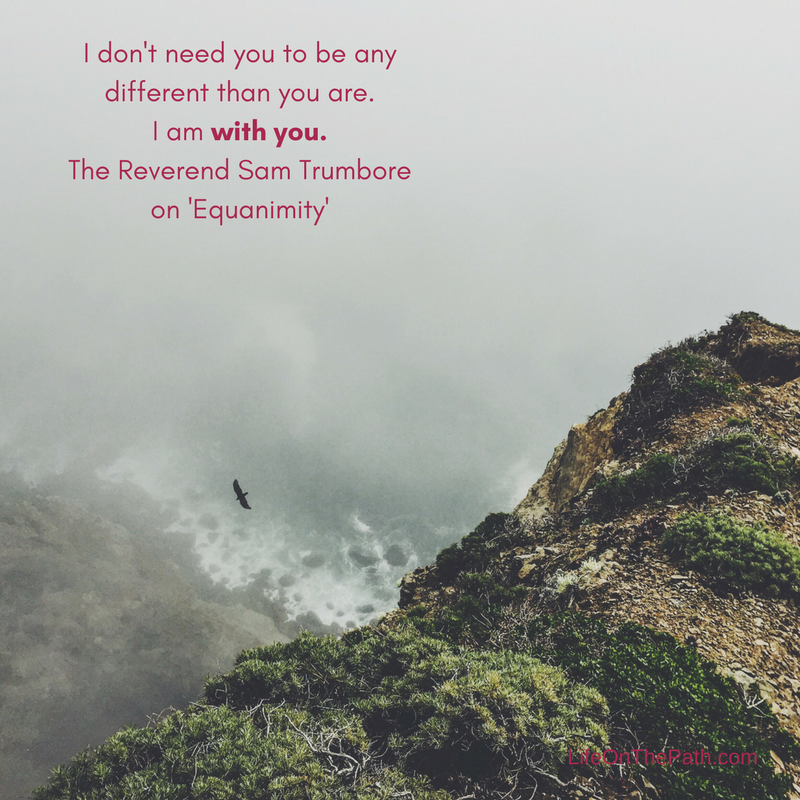 Hearing this, I said, ‘That sounds like love to me.’

Sam agreed – it is love.

The First Unitarian Universalist Society of Albany is a very activist congregation. They have always been historically involved with women’s reproductive rights, and the sanctuary movement. Right now, they are also committed to issues like mass incarceration (with CAAMI) and the Black Lives Matter Movement. Members also partner with The Capital District Coalition Against Islamophobia. The work is lead by the congregations’s Social Responsibilities Council. Even when the congregation as a whole isn’t involved as a whole, members are involved in projects and causes throughout the region.

He feels politics in Albany can be toxic and it’s hard to get things done. That said, he does see a lot of positive including with Kathy Sheehan’s administration and their priorities.

The Albany congregation supports local schools. They helped both in funding and building of a playground at the Sheridan Prep Academy. This fit the church’s strategic plan of helping children and families in Albany, and fosters long-term engagement with the school

One thing I find very interesting is the idea that Reverend Sam Trumbore shared with me about interfaith connections. Since the congregation is a community with shared values and not beliefs, they already are practicing being interfaith within the congregation.  This is something they can carry out in the community.  As a whole they are not out to convert, but appreciate and celebrate different beliefs and practices. Instead the values of tolerance, acceptance, and curiosity work best when learning about other faiths.

Another area of commonality is that all these interfaith groups want to work on social justice. We in Albany have an unusually interrelated interfaith community.

The current climate under Trump is the opposite of this. Trump doesn’t embrace shared values or appreciate multiple views- he bellwethers. Unlike many others, Trumbore does feel Trump is a good communicator. But because he is a demagogue, and not sharing substantive ideas, his following will get narrower.

The current climate has energized people and the congregate has grown- people are energized for opposition! We’re no longer complacent.