Written on June 1, 2017 by Anna Varney in Spirituality Upstate NY with 4 comments

Jun Yasuda is an inspiration. I hope that doesn’t sound trite because I mean that in the most sincere way possible. She is a guiding light and example of faith and activism in our community, and has been so for decades.

I spent a few hours with Jun Yasuda at the Peace Pagoda in Grafton, NY and learned much about integrity and responding to the sacred in everything around us.

Here are some of the things that I learned about Jun Yasuda and the Peace Pagoda. 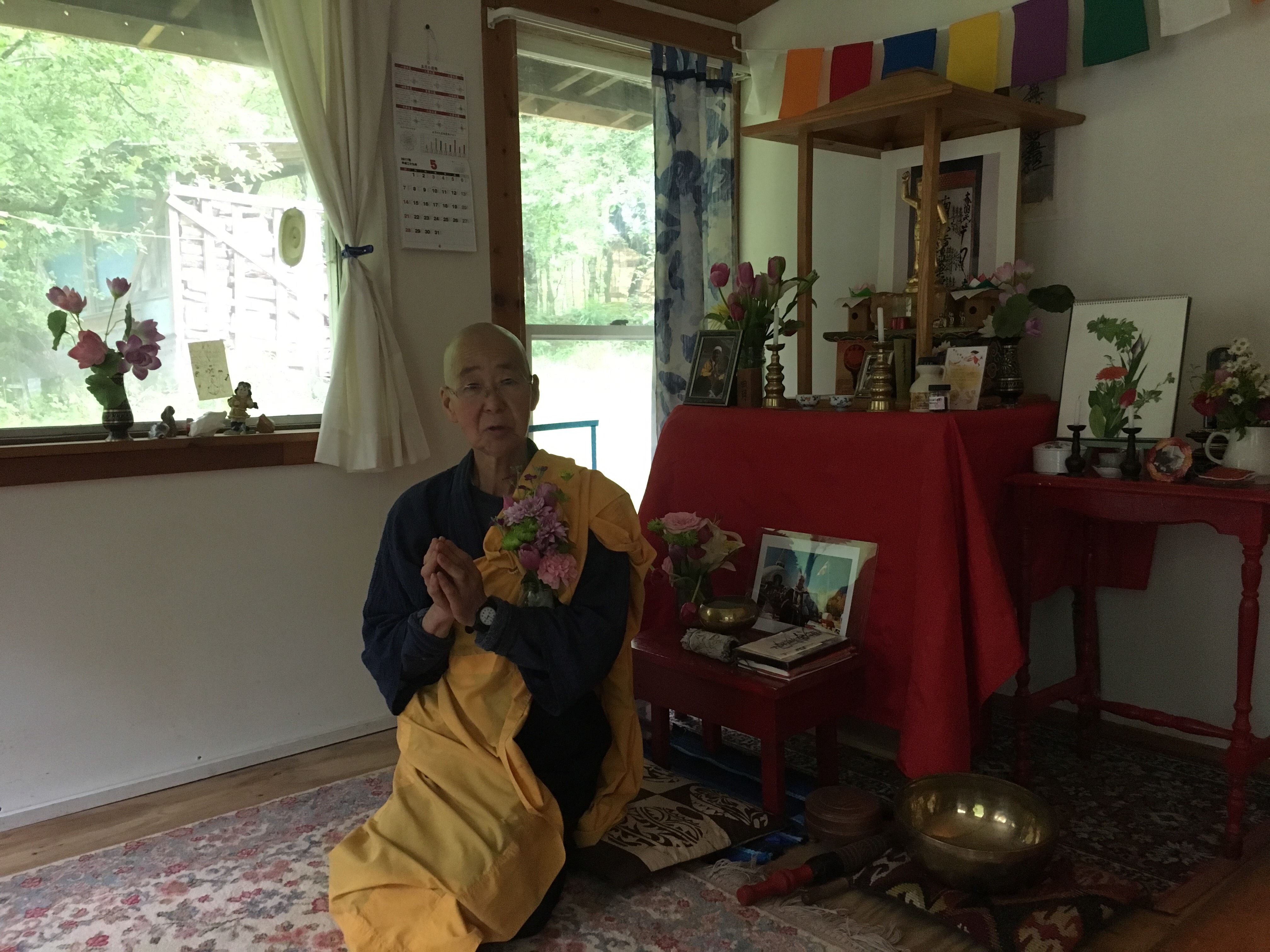 Jun Yasuda in front of her kitchen altar

Welcome to the Peace Pagoda

First, I was welcomed in the warmest way possible. Yasuda greeted me and told me to walk around the grounds.  I’ve been to the Pagoda before, but always at a ceremony or festival.  Walking on the grounds by myself was a holy, tranquil experience. The day I visited is also the anniversary of my father’s death, and so I was already emotional. I prayed and centered myself while walking through this verdant area. 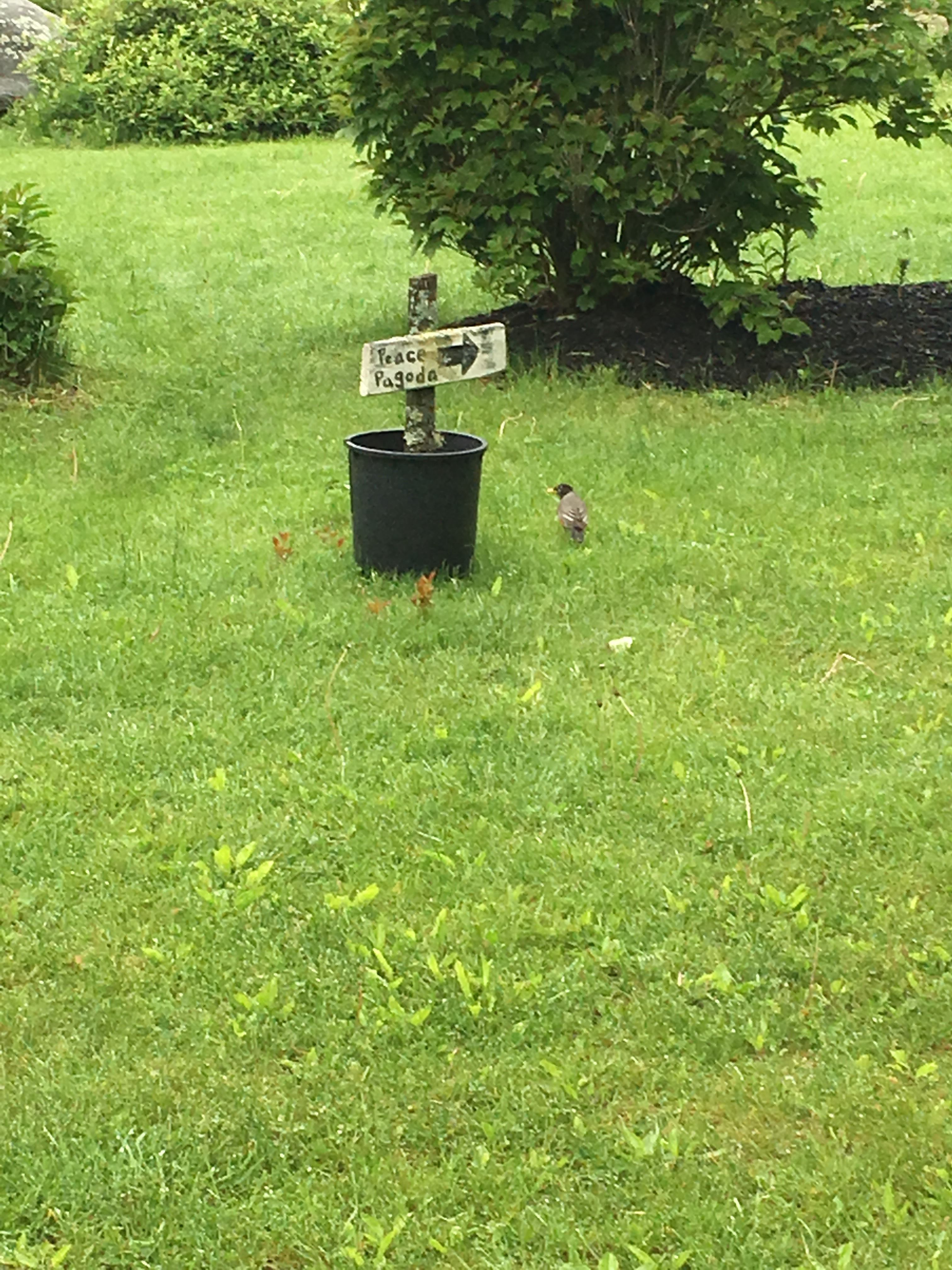 Nature at the Peace Pagoda 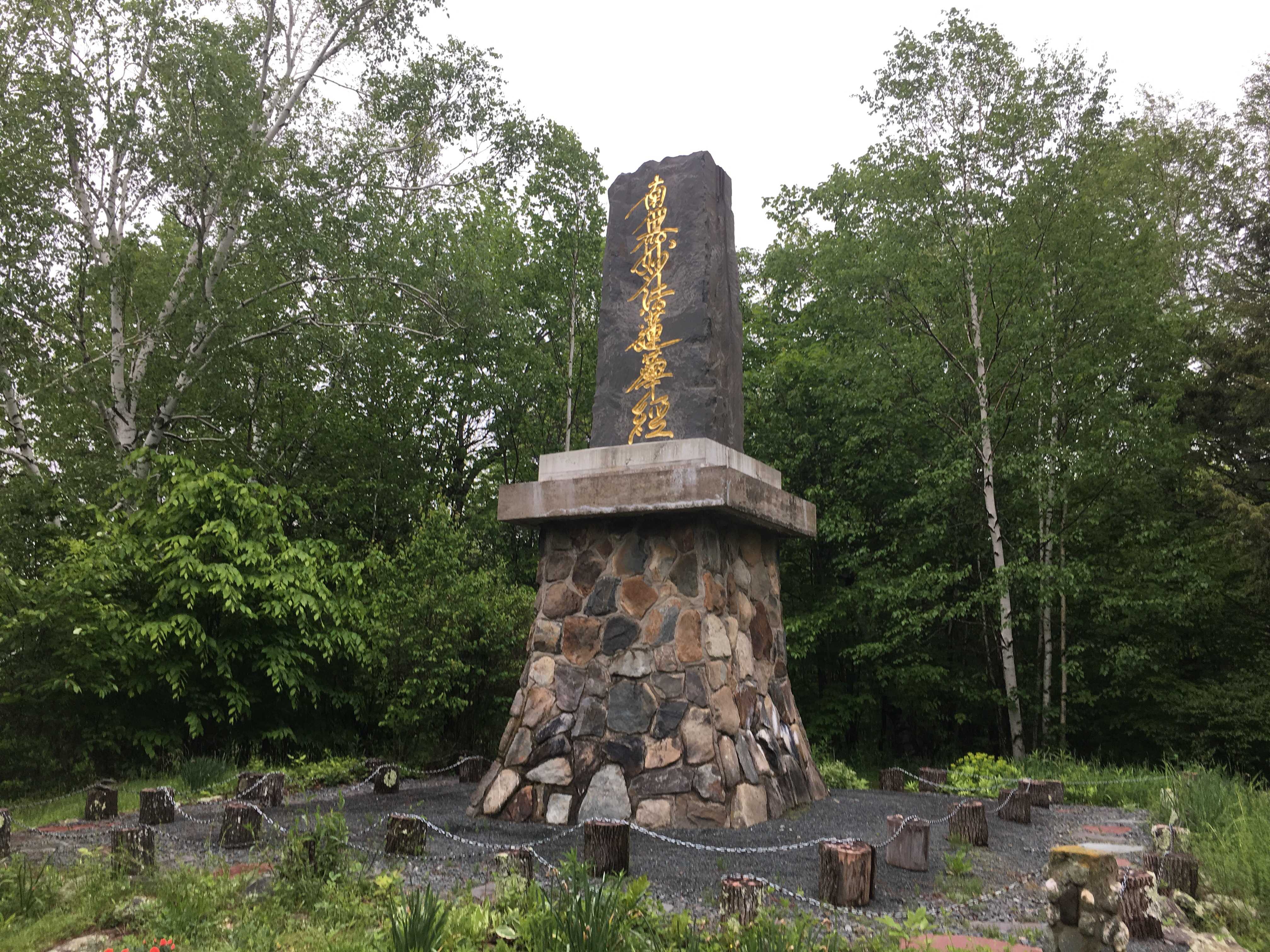 Altar at the Peace Pagoda

After my time alone, I entered the temple and was greeted with a welcoming ceremony, and ringing of singing bowls, with the customary chant for peace, Na-Mu-Myo-Ho-Ren-Ge-Kyo (more on this chant later).  I felt honored and open to a meaningful conversation over tea, in a cozy kitchen with beautiful paper cranes adorning one of the beams. 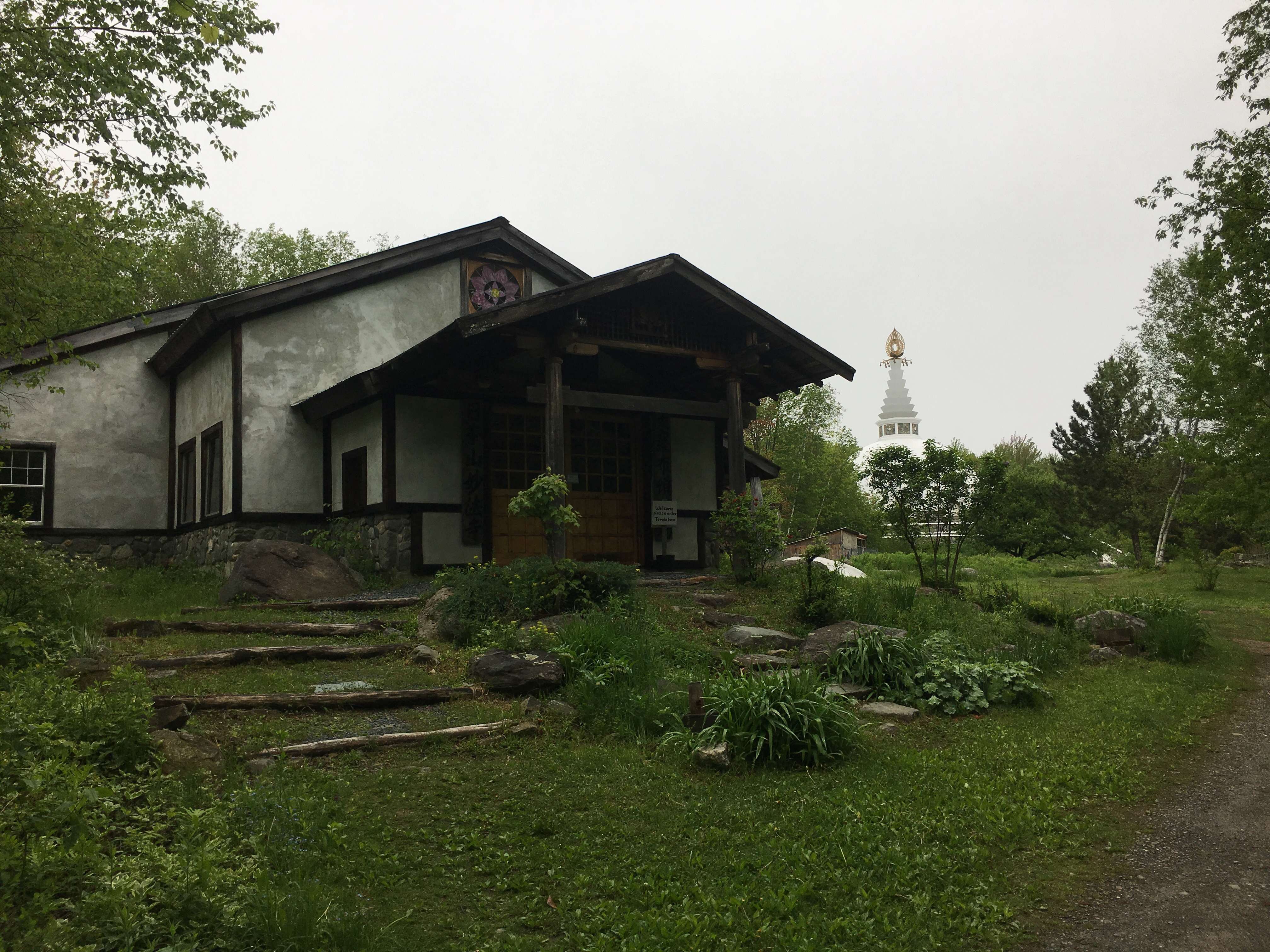 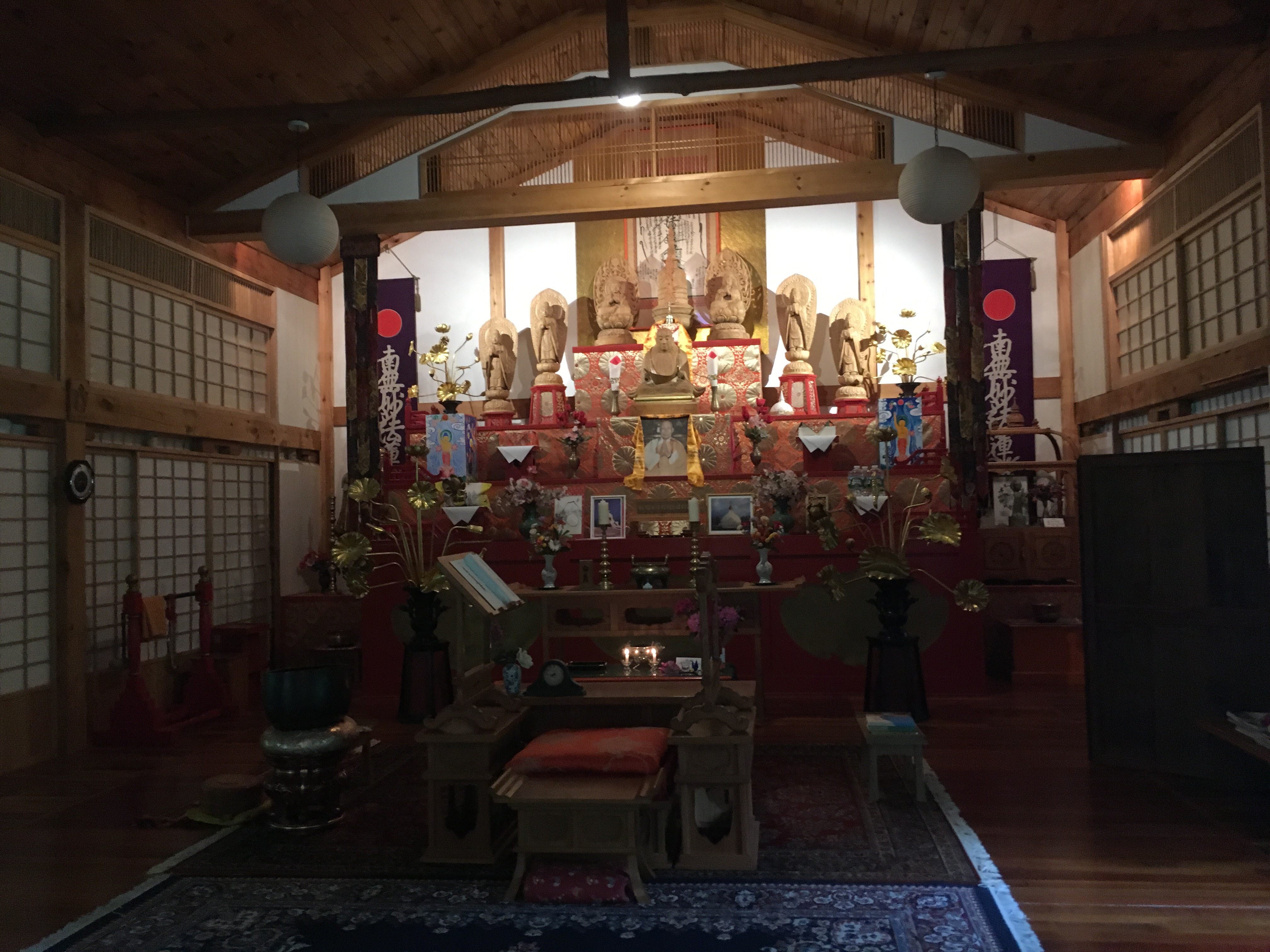 Altar in the temple

Jun Yasuda pulls no punches on Japanese culture and society- she says that for her it was dehumanizing with the post war emphasis on materialism.  She felt that she was out of synch with her classmates, all of whom were focusing on jobs and finding a way to live comfortably. One of her earliest influences was learning and reading 1200 year old Buddhist literature. This literature focuses on the ephemeral nature of life, with the examples of the wind blowing cherry blossoms and the sound of a clanging gong. The reality of that effected her more than the emphasis on stability. Jun Yasuda was countercultural from her childhood! Although her mother influenced her to find a husband and settle down, she could not be ‘happy in her soul.’

She couldn’t fit in, and rebelled by smoking, drinking and partying but also by going to photography school and joining art movements (your author knows all too well what all of this this is like!)  She also participated in anti-Vietnam demonstrations, since Japan’s weapon’s companies helped contribute to that war.

Still, she searched and searched for answers. She was also highly effected by a movie that showed a soldier turning to Buddhism.  She felt, on some level, that ‘this is my karma.‘

Although she married, Jun Yasuda had a different destiny than marriage.

In Mumbai, she saw a ‘more human way of life,’ where prayer and purification are daily rituals. For Yasuda,

Prayer is part of human nature.

She traveled back and forth from Japan to India, but each time becoming more certain of her karma.  With some monks, she made rounds to a hospital, and found that their drumming brought out the Untouchables in the community, who gave food and drink most generously. This was stunning to her- the generosity of people defined by their societies’ unwillingness to have them as part of their community.

This was her turning point.

Jun Yasuda saw how we are each interconnected:

Each person is sacred. All living things are related- the mountain, the sun, the moon, us.  We are part of the universe.

After this awakening she had a dream about an elder monk and was told that this monk is in in a Peace Pagoda in the middle of a mountain in Sri Lanka and traveled to meet him.  She spoke to me about the founder of her order, Nichidatsu Fujii, but also an older monk who inspired her. This older monk never talked about Buddhism, but he would awaken at 3am and clean, doing the most brutal tasks.  He gave away all he had and she found his humble nature divine.

Life in Sri Lanka was tied to work and the earth- chopping wood, caring water, making meals, but she loved it and decided to ‘throw her fate to the universe.’

And then she became a Buddhist nun.

Much of what Jun Yasuda is known for involves her walks for peace and specific causes. Her order, the Nipponzan Myohoji, is focused on anti-war activities and ending nuclear war in particular as one of its main missions. Through one of these peace walks in Hiroshima, she met various Americans and was told by other monks that Americans were yearning for a peaceful way of being.

She also met one of the main leaders of the American Indian Movement, Dennis Banks, and it was to prove one of the most significant friendships of her life.

Jun Yasuda then became involved in the Longest Walk, which was a difficult five month walk for water, land, and other rights. Often, they’d be marching 35 miles a day. Yasuda came to the U.S. at the urging of her spiritual leader, but even though she didn’t know English, and could only walk and drum, it proved to be the beginning of her relationship with various Native American communities.

Jun Yasuda emphasizes the special value that Native Americans bring to the world.  Although some of the ceremonies may be different, Buddhism and Native American faith are both nature and prayer centered. She credits Native people for their deep respect for Mother Earth, being non-hierarchical, and being woman-centric. She told me, ‘I studied Buddhism watching native people.’  The emphasis on the sacredness of all living things is key to Native people and Buddhists.

Having been involved with the American Indian cause since the 1970s, Yasuda, was at Standing Rock last November and believes this non-violent mode of resistance is going to change the world. She expressed how impressed she was with the young men and women leading this new movement, who speak to their members about not being angry, but to be aware how your ‘mind is colonized.’

Reader, as a supporter of the Standing Rock movement, that blew me away when Yasuda uttered those words. She believes that Standing Rock is a spiritual awakening.  I have long felt that connection and action will change the world and was moved to hear that she sees this happening right now.

How The Peace Pagoda Came To Be

Yasuda has had many adventures- her life really is a winding road! Her friendship with Dennis Banks and his family lead to living in the Onondaga Nation when Banks had to act as a fugitive after being indicted of crimes related to the takeover at Wounded Knee ( as an aside, do learn more about this fascinating time in American history: Wounded Knee Takeover).  To help him, she did walks from Onondaga to Albany and fasted; it took years, but Mr. Banks was freed and has gone on to do many things for the American Indian community.

The Peace Pagoda in Grafton, NY came about through many donations and contributions from religious groups of all kinds. Companies even donated construction materials.

Jun Yasuda says all of this came from ‘people’s pure hearts’ and that it was a miracle.

Our mission is world peace

I think that people in Upstate NY are very attracted to that mission and many people wanted to help create this symbol and destination.

Since she has spoken to me about really being open to where life takes her, I did ask Jun Yasuda what she thinks of this land. She feels that we are people who make choices. We now have to move away from a money focus, an addiction focus and heal with open hearts.

Our focus is prayer.  I have to open myself and not point to other people.

For Jun Yasuda, all of the world’s religions focus on Love, Compassion, Friendship. If we practice the highest teachings, we will have no boundaries.

Na-Mu-Myo-Ho-Ren-Ge-Kyo, or the Lotus Sutra, was the last teaching of the Buddha. I had tears in my eyes  as Jun Yasuda said these final words of our interview to me:

You are God. For some reason you came into this world. You come from God. You are going back to God.

Lessons of the Day from Jun Yasuda

It has been a few days since this exceptional interview and what I learned can be summed up below: 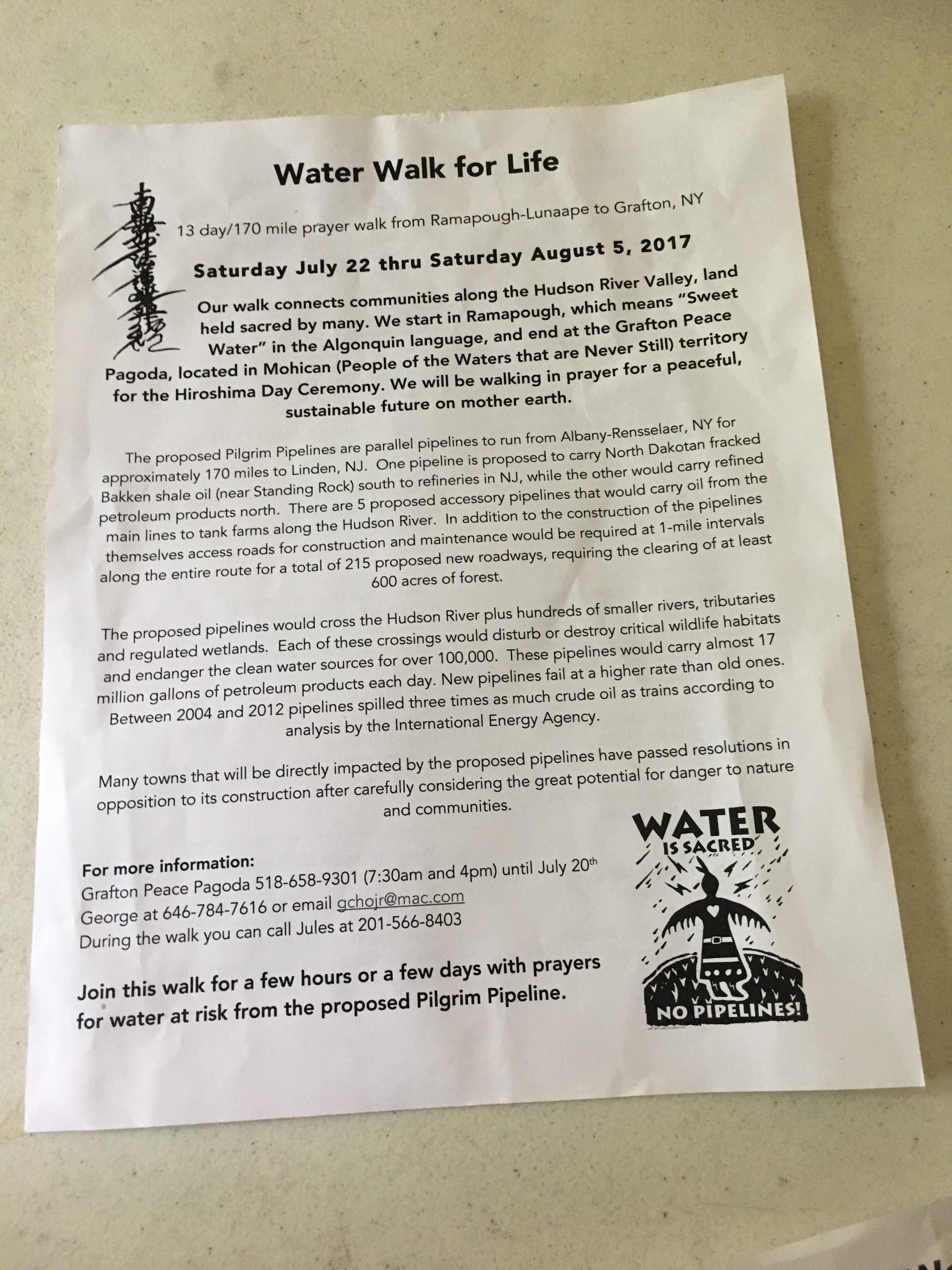 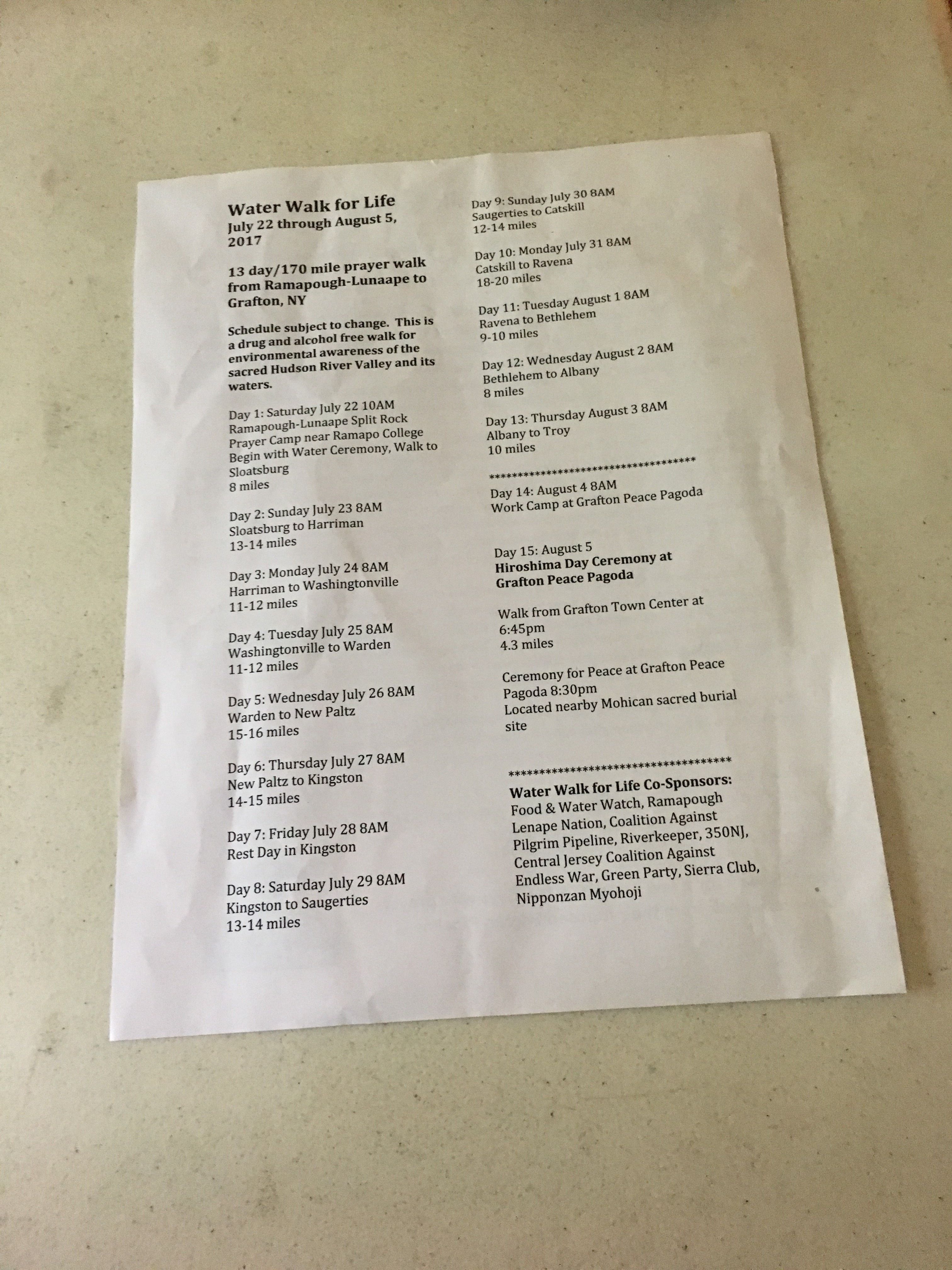