The documentary “I Am Not Your Negro,” is less a movie than a plea for awakening and transfiguration of American culture. I was so stunned the first time I watched it, that I had to see it again two days later.  Since then, I’ve been thinking about James Baldwin and his call to truth.

In  1979 James Baldwin attempted to write the story of the murders of Martin Luther King, Malcolm X, and Medgar Evers. He never completed that project. He did leave behind extensive notes and these form the framework of the documentary.

The documentary shows good footage of Medgar, Malcolm, and Martin, three martyrs to the cause of racial justice and equality.  Since Baldwin was friend to all three men, he can speak to the similarities and differences of all three.  Malcolm and Martin may have been poles apart but they eventually moved closer in viewpoint, and, according to Baldwin, had virtually the same beliefs when they each were assassinated.

What elevates the documentary is how the director interweaves footage of Ferguson, The Obamas, and our mass incarceration system. We have not come very far in the struggle for justice.

Baldwin was a deep intellectual- he saw things very clearly and gives a damning critique of the shallow nature of much of American culture.  He sees much of American life as fat, sleek and empty- Americans abdicate responsibility and don’t tell the truth of our history. There are scenes juxtaposing the 1950’s and ’60s materialistic fervor with police brutality against blacks. It’s chilling.

All your buried corpses now begin to speak- Baldwin

From an economic point of view alone, there is still very little acknowledgment that the growth and prosperity of our nation is due to slave labor for hundreds of years. In fact, much of our popular fiction acts as if slavery was a picnic, or that it wasn’t ‘really’ that violent- see “Gone with The Wind” if you don’t believe me. The evidence proves otherwise- exploitation and brutal violence against millions of people (read The Half Has Never Been Told if you want to learn more about this).

Ta-Nahesi Coates’ Between The World And Me  also talks about the false dreams and promises as well and I see him as one of Baldwin’s heirs. If much of American life, this dream of escape and prosperity, is a fiction and narcotic, how do we wake up?

The parts of the documentary that made me sit up most include a blistering excerpt on segregated institutions and why Baldwin chose exile (it’s a really interesting exchange on the Dick Cavett show with Paul Weiss.  It’s available here: Baldwin on Dick Cavett ) to France.

But really, what has kept circling in my mind is scapegoats.  Baldwin asks why did the American people feel it ‘necessary to have a nigger in the first place?’

This past Sunday, at church, the idea of scapegoats came up: John the Baptist, the first martyr Stephen, and of course Christ.  Scapegoating is as old as humanity- we blame and victimize because we want to abdicate moral responsibility for our own lives.  Entire cultures do it (think of the Nazis with the Jews or the Armenian genocide). In America, we primarily have used and abused black people. It continues to happen.

As a person who wants to stay conscious, do my part to make this country better, what do I do?  Where do I stand? I believe we must, as James Baldwin says we must, face this problem.  We must actually believe that Black Lives Matter and not scream “All Lives Matter,” that indignant, nasty response. We must accept that some of us have privileges and do our best to lift up and share, and . . .not believe that there is only ‘so much’ for each of us.

First, we face the issue head-on and accept that racial injustice keeps getting perpetuated at every level.  Then we work to change these institutions, change our relationships.  One step at a time. Act in our families, then locally, and then nationally. 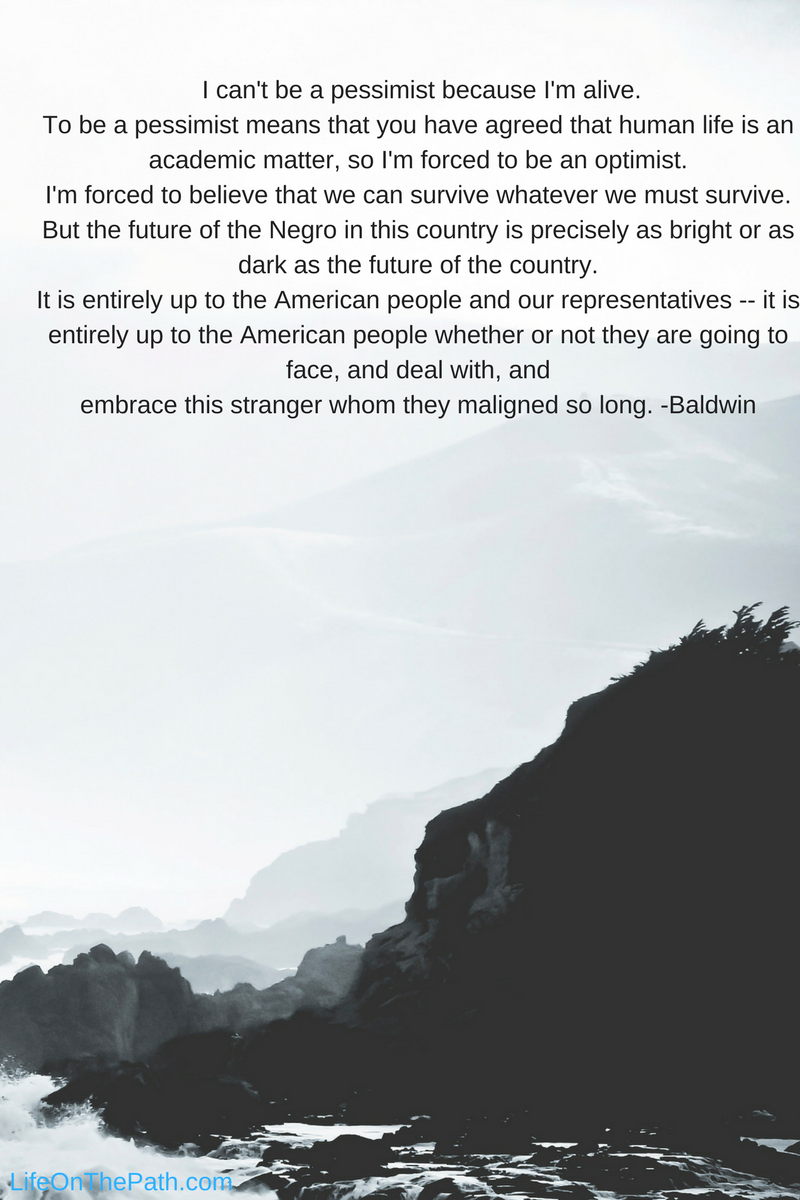 I can’t be a pessimist because I’m alive

Gethsemane – A Poem and Mediation